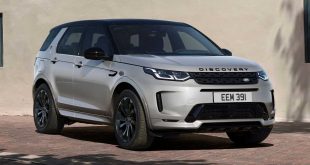 The Discovery sits right in the middle of Land Rover’s core lineup as a bread and butter model. With three rows of seats, it competes with other luxury mid-sizers from BMW and Mercedes-Benz, without the enormous price tag of a Range Rover model or the advanced capability of the Defender. The Discovery is still pretty rugged, though, and this new model looks like the best one yet.

The Discovery’s interior materials are upscale and the design is appropriately posh. Luxury features abound throughout the cabin, and the level of comfort only increases as you climb through the more expensive trims. Power-adjustable, heated leather seats with optional massage function for the driver and front-seat passenger offer good support and even better cushioning; second-row seats provide fore-and-aft and recline adjustments. Without adequate space to haul gear there would be fewer opportunities for adventure. With both of its rear rows of seats folded, the Disco’s spacious cabin proved to be quite accommodating with room for 29 of our carry-on suitcases. But flip the last row of seats up and load the Discovery with the full complement of seven would-be explorers and the maximum number of carry-ons it can carry drops to just two behind the third row. The rest of the 2021 Discovery’s changes lurk beneath its semi-new duds. Standout among them is the new Pivi Pro touchscreen infotainment system, which lives in a flat 11.4-inch display nestled in the dashboard. Having not yet used the system, the only criticism we’ll levy is an armchair-quarterback-style barb about how the flat screen looks slightly tacked onto the dash, especially given how the center stack it lives on is curved in a gentle arc the display doesn’t match. Anyway, Land Rover promises the screen is larger (by 40 percent), brighter (by 30 percent), and quicker to respond than its predecessor. The brand also claims 90 percent of menu functions are accessible with two taps or fewer, and a built-in battery for the display powers up the navigation system in “seconds.”

Both of the Discovery’s V6 engines, the supercharged gasoline V6, and the turbocharged diesel, are gone for the 2021 model year. The base engine is now a 2.0-liter turbocharged four-cylinder producing 296 horsepower. The Discovery is also offered with the same 3.0-liter turbocharged mild-hybrid inline-six found in the Defender and other Land Rover models if you need more oomph. Here, it produces a healthy 355 hp, a 15 hp bump over the outgoing supercharged V6. The inline-six should also offer gains in fuel economy and a much smoother stop/start. Europe will still receive a diesel option, but the US will only get the gasoline engines.

All Discovery models come standard with Land Rover’s Pivi Pro infotainment system. It features an 11.4-inch touchscreen display and advanced features such as an onboard Wi-Fi hotspot powered by a 4G LTE data connection and real-time traffic-and-weather updates. Pivi Pro debuted with the Land Rover Defender in 2020 and is being rolled out in other Land Rover and Jaguar products. It features a simpler menu layout and is capable of over-the-air updates. As many as nine USB ports dot the cabin, and novel tablet-holding accessories can be used to set up rear-seat entertainment for kids. Apple CarPlay and Android Auto capability is standard, as is a wireless smartphone charging pad, a 12.3-inch digital gauge display, and a full-color head-up display.

Blending all-terrain load-carrying sophistication with an image suitable for any board meeting, the Land Rover Discovery Commercial is basically unique in the van market right now – not even those rival commercial 4x4s come close to matching its overall polish.

Just keep in mind that its load area and payload are limited compared to almost any conventional commercial vehicle, and given its price you really want to be absolutely certain it meets your needs before committing to buy. From modest off-roader to luxuriously appointed overlander, the 2021 Land Rover Defender offers is an …